Top 24 One-Hit Wonders of the Decade 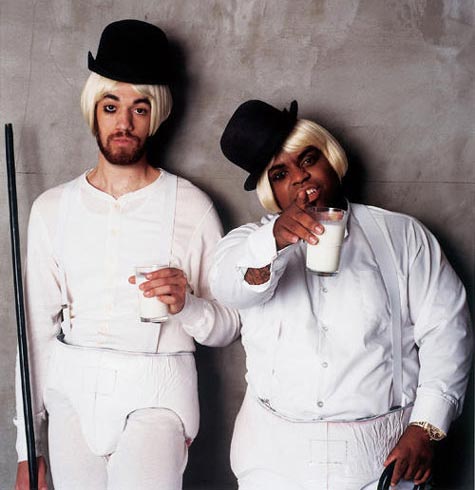 Billboard just released their list of the top 24 one hit wonders of the decade. Obvious choices include Daniel Powter with “Bad Day,” James Blunt with “You’re Beautiful,” and Gnarls Barkley with “Crazy.”  And personally, I’m not sure if I think Lou Bega really qualifies, since the song came out in 1999…

NEW YORK (Billboard) – They came, they conquered … they were never heard from again. After reaching the Hot 100’s Top 10 with their very first singles, none of these acts managed to crack the Top 25 for the rest of the decade. But hey, four minutes of fame is better than nothing.

The one-hitmakers on this list have been ranked by how high their big song climbed on the chart compared to how far down the tally their subsequent highest-charting effort peaked.

Daniel Powter’s “Bad Day” was used as the kiss-off song for the fifth season of “American Idol,” which gave the song enough juice to become the biggest single of 2006. The song went to No. 1 in April and stayed at the top for five weeks. But Powter’s good fortune didn’t last long; he hasn’t visited the Hot 100 since.

Terror Squad, the hip-hop collective led by Fat Joe, topped the charts in August 2004 with “Lean Back,” giving the world a new dance craze in the process. The Squad fell back hard after that, only reaching as high as No. 62 with a subsequent single: “Take Me Home,” at the end of 2004.

L.A. rap-rockers Crazy Town flew to the top of the charts with the Red Hot Chili Peppers-infused track “Butterfly” in March 2001, and hovered at No. 1 for two weeks. The band’s wings were clipped after reaching that peak; they never saw the Hot 100 again.

Atlanta’s D4L hit a sweet spot with “Laffy Taffy” in January 2006, when the song peaked at No. 1. The foursome only made it to no. 72 with their next single, “Betcha Can’t Do It Like Me.”

James Blunt sweet-talked his way to No. 1 with the inescapable ballad “You’re Beautiful” in March 2006. But fans dropped him soon after; his appropriately titled next single, “Goodbye My Lover,” only reached No. 66.

“Crazy” was such a gargantuan smash, it felt like Gnarls Barkley’s spell would never wear off. But after peaking at No. 2 in July 2006, Ceee-Lo and Dangermouse haven’t made it past No. 88 with their subsequent singles. Crazy, indeed.

9. BO BICE – INSIDE YOUR HEAVEN

Bo Bice won the hearts of “American Idol” viewers with “Inside Your Heaven,” which peaked at No. 2 in July 2005. After the cameras turned off, voters quickly tuned out. His next highest-charting single, “The Real Thing,” peaked at No. 56 in May 2006.

Dream lived up to their name with “He Loves U Not,” which climbed to No. 2 in December 2000. After that, the manufactured girl group woke up and rose only to No. 39 with their next single, “This Is Me,” in the summer of 2001.

J-Kwon intoxicated the airwaves with “Tipsy,” scoring him the No. 2 spot in April 2004. He hasn’t stumbled as high on his own since, but he did ride Bow Wow’s coattails to No. 23 in April 2006 with the collaboration “Fresh Azimiz.”

Lou Bega’s ubiquitous “Mambo No. 5 (A Little Bit Of)” climbed to No. 3 in November 1999, and stuck around for months after peaking. But Bega hasn’t flirted with the charts much since; his next-highest charting single, “Tricky, Tricky,” only reached no. 74 in February 2000.

Cute and cuddly Lil Romeo skipped all the way to No. 3 in June 2001 with “My Baby.” But puberty didn’t do the pint-sized rapper well; none of his solo singles have even touched the Hot 100 since.

Lumidee promised to “Never Leave You” with her first single in August 2003, which climbed to No. 3 on the charts. She didn’t keep her word. Outside of a No. 43 appearance in April 2007 with “She’s Like the Wind” featuring Tony Sunshine, she hasn’t visited the Hot 100 since.

In August 2004, Kevin Lyttle, with help from Spragga Benz, lit up the charts with “Turn Me On,” which peaked at No. 4. The airwaves have since turned him off, and the Caribbean crooner has yet to return to the Hot 100.

Youngbloodz teamed up with Lil Jon on “Damn!,” which rose to No. 4 in November 2003. The Hotlanta duo had much to curse about after that; they didn’t go nearly as high with their next biggest hit; “Presidential” peaked at No. 81 in November 2005.

It’s a good thing Mike Shinoda has Linkin Park to fall back on. Fort Minor, his musical side project, started big, reaching No. 2 with “Where’d You Go” in June 2006. Fans have been asking the same question since then; the band’s next biggest hit, “Remember the Name,” peaked at No. 66. three months later.

Irish singer Samantha Mumba rose to No. 4 on the Hot 100 with “Gotta Tell You” in December 2000. The airwaves refused to listen after that; her next-biggest single, “Baby, Come Over (This Is Our Night)” climbed only to No. 49 in June 2001.

Cassidy went all the way to No. 4 in March 2004 with “Hotel,” featuring R. Kelly. But the Philly rapper checked out of the chart shortly thereafter, only making it as high as No. 33 with “My Drink N’ My 2 Step” three years later.

23. THE CALLING – WHEREVER YOU WILL GO

In March 2002, L.A. rockers the Calling reached their highest high when their single “Wherever You Will Go” peaked at No. 5. The band has not come calling back to the charts since.

Vanessa Carlton wooed listeners in May 2002, when her piano ballad “A Thousand Miles” hit No. 5. Five months later, she was back on the Hot 100 with “Ordinary Day,” but the song — her second-biggest single — barely cracked the Top 30.