Phish recently laid down an incredible 4-day run at American Airlines Arena in Miami, FL, the band’s first New Year’s Eve run since setting up shop in Miami for NYE 2003.  The shows featured some incredible moments, including 12/30/09’s Set One bust-outs of Soul Shakedown Party, Dixie Cannonball, Corinna, What’s The Use?, and the long-awaited Tela, 12/31/09’s Fishman disco mirror ball prank and audience member “Sarah” (Fishman in drag) being pulled on stage to play Fluffhead and the rest of the set with the band, not too  mention 12/29/2009’s majestic Tweezer > Caspian, and a great show on 12/28/2009 that will forever live in the shadows of New Year’s Eve 2009’s more prominent moments.  Anyways, now that we’re all back and settled in, there are some people hungry for their Phish Miami Posters.  While there was no Pollock this weekend, Tyler Stout official set of 4 posters looks amazing, and there are other great prints from Jeff Wood, Isadora Bullock (whose Festival 8 poster was amazing), Jeral Tidwell, and Fluffhead Studios.  Without further hold up, here’s some of the prints and posters to be found from last weekend.  Click on the photos and links for purchase information: 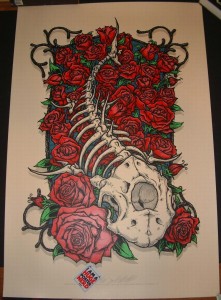 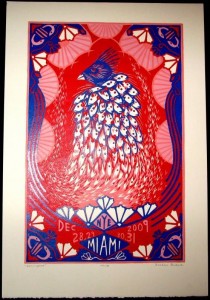