We took some photos during early June of how things are doing in the garden. We got a late start on planting, so typically you’d see a little more activity from most of these plants by now, but they’ll catch up during June.

Click on any image to see the larger version: 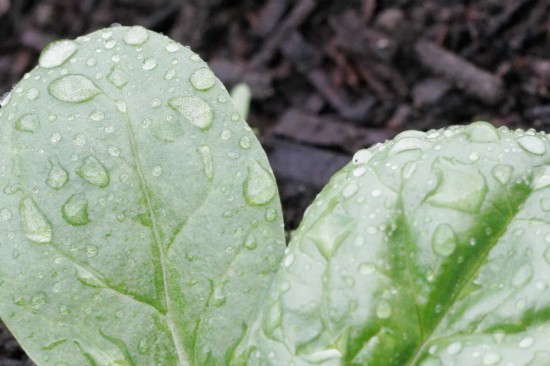 Water droplets on spinach from the night's rain.

This is a snap pea shoot, which has been in the ground about 10 days. The pole on the left is from a small tripod teepee that will support a number of peas growing in the same spot. This variety is Super Sugar Snap from Territorial.

Chive Flowers blooming - I just ate my first one for the season yesterday. I planted quite a few chive seeds around the base of my apple trees, I'm hoping they germinate soon...

A shoot of corn coming up - we planted a super early variety called Early Sunglow Hybrid that only takes 63 days to mature.

I left town for 3 days, and our mustard plants (which had been overwintered) had skyrocketed about 2 feet in the time I was gone.

Pole Beans coming up - this variety is Red Noodle Yard Long Bean - which produces 18-inch long beans in 90 days. These pole beans will grow up the large teepee that we made. The stuff that we can reach will be harvested as soon as we can, and the higher up stuff we'll pull down at the end of the season.

Our clover again, about 1 month after it was planted. You can see that it's doing best in the cracks of the soil and other areas that allowed the seeds to germinate without drying out. There is also some grass growing up from the sod that we flipped over. We've been pulling that out by hand.

One last shot of the beautiful spinach, since it's the biggest thing in the garden right now aside from the globe artichoke.

These are my milk jub cloches. They are intended to protect tomatoes and a few warmer loving crops - but I don't necessarily recommend them. After testing them out, I think they might block light from the plant and I don't think they retain any heat. Next year I will be testing out clear plastic containers (I still can't justify using those expensive glass ones sold in the catalogue, but of course I think they work best)

The leaves on our dwarf apple trees are starting to emerge.

All photos by Kane Jamison, please feel free to reuse them under the Attribution-NoDerivs Creative Commons License with a link back to this post.